Dear customers and music lovers:
After a brief hiatus during my travels in Spain and Portugal I’m back at GET HIP HQ and we have a lot of New Releases & Restocks to offer!

We are also working on some new exciting projects and as always we offer the best service, prices, selection and assistance a true music lover can expect! Don’t hesitate to contact us with inquiries or comments!
THANK YOU!
Barbara & Get Hip staff

ORDER NOW from our WEBSTORE!
Pittsburgh peeps! Come into our Store
OPEN Monday – Saturday from 10 am to 6 pm! 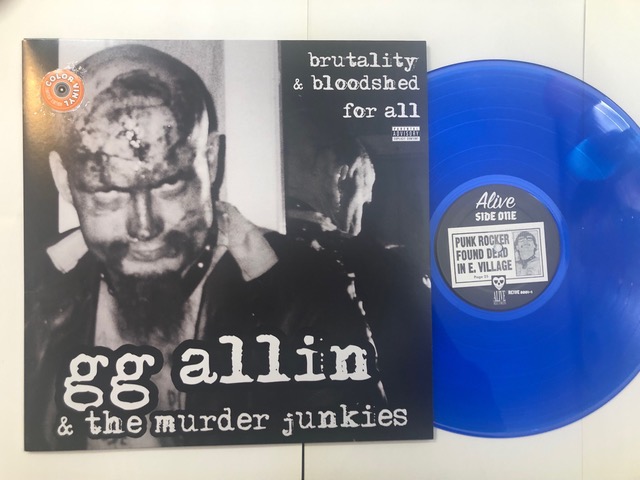 This is GG’s final studio album and also his most coherent and well produced work of his career. This is a must and truly a legendary recording.

LEGER, JERRY “SONGS FROM THE APARTMENT“  GOLDENROCKET-1LP (GOLDEN ROCKET)
The surprise 2020 by Toronto singer-songwriter extraordinaire is a collection of lo-fi recordings made at home with one microphone. The performances are relaxed, intimate and unguarded. Initially released digitally, is now available on ltd. ed Red Vinyl.

CHILTON, ALEX “FREE AGAIN: THE 1970 SESSIONS“  OMNIV-13 (OMNIVORE)
Chilton’s first post-Box Tops and pre-Big Star recordings. In the latter months of 1969, Alex Chilton decided to take back his life. At a time where liberation and self-expression were rallying cries, Alex Chilton was about to break free.

DELMONAS “HELLO, WE LOVE YOU! THE BIG BEAT EP’S“  10WIK-348 (BIG BEAT)
Tracks from the group’s two 1984 EPs together on a swanky 10-inch vinyl LP. Inner bag features liner notes by Kris Needs incorporating new interviews \with all three Delmonas and a series of great photos by Eugene Doyen.

FUZZTONES “SALT FOR ZOMBIES“  EARS-093 (EASY ACTION)
Reissue of 2003 album on Color vinyl with a bonus 7” of an Alice Cooper cover thrown in for good measure. Good old-fashioned garage rock music with plenty of organ and plenty of throaty vocals, including from The Seeds’ Sky Saxon on 1 track!

TONY & FRANKYE “S/T“  GROO-071LP (GROOVIE)
NEW NUMBERED LIMITED WITH OBI OF THIS SUPER KILLER FUNK BRAZILIAN LP. For any fans of Psych with Fuzz and Funk, this record should be
no surprise! Full of groovy gems!! Including compositions by Tim Maia, Robson Jorge or Getulio Cortes

VARIOUS ARTISTS  “FUNKADELIC Reworked By Detroiters – TRIPLE LP“  SEW3-158 (ACE)
A diverse selection of remixers from today’s generation of Detroit producers and musicians, looking back at the immense legacy of Funkadelic and re-imagining it for now, representing the vastness of Funkadelic’s genre-bending music.

BARNETT, COURTNEY & KURT VILE “LOTTA SEA LICE“  OLE-1148-1 (MATADOR)
Lotta Sea Lice is the product of Courtney Barnett and Kurt Vile’s creative partnership. With it come songs as effortless and organic as the pairing of the collaboration: nine tracks of beautiful, country-tinged “harmonies and guitarmonies galore.” (2017)

BRUNO, ROLANDO Y EL GRUPO AREVALO “EL MUNDO ESTA CUMBIANDO“  GROO-073LP (GROOVIE)
Rolando Bruno cumbia project, was born in 2005, in the solitude of his room and with his best friend and computer, used to create his cumbia backing tracks. In 2015 back in Buenos Aires he created the band and label its style Cumbia trash!

COCTEAU TWINS “TINY DYNAMINE / ECHOES IN A SHALLOW BAY – 180-GRAM“  CAD-3510-1 (4AD)
Cocteau Twins’ two EPs of Tiny Dynamine and Echoes In A Shallow Bay were originally released two weeks apart back in November 1985. Seen as companion pieces, they both acted as a precursor to their fourth studio album, Victorialand. Reissue. (2015)

CURLEE WURLEE “OUI OUI“  SFR-011 (SOUNDFLAT)
Curlee Wurlee! are back with an impressive 17 track long-player on SOUNDFLAT RECORDS.  The album “Oui Oui…” proves how much they’ve developed and fine-tuned their organ based hallmark sound since their foundation in 1999.

DEAD ROCKS “SURF EXPLOSAO“  GROO-048LP (GROOVIE)
It’s the brand-new full-length LP from premier Brazilian surf trio The Dead Rocks! While they’ve gone for spaghetti surf sound with previous releases, this one is all about surf rock. What a way to celebrate 10 years in the biz! (2015)

GALL, FRANCE “BABY POP – 180G / MONO“  TMR-636 (THIRD MAN)
Baby Pop is not only an important album for France herself, it is also a hugely important record for the entire yé-yé scene. Baby Pop hinted at the musical direction that yé-yé was headed.

GALL, FRANCE “POUPÉE DE CIRE, POUPÉE DE SON – 180G“  TMR-635 (THIRD MAN)
Third Man Records is beyond honored to bring this music to a larger audience by issuing the first authorized North American vinyl pressings of these titles, some of the most brilliant highlights from Gall’s catalog.

HIGHSPEED V “DEMENTED R&B“  GROO-043 (GROOVIE)
Although they existed for only a year, the Highspeed V made enough of a mark on Stockholm’s pioneering neo-garage scene for their name and music to live on several decades later. Features 13 tracks, including unreleased demos. Limited to 500 copies.

JOHNSON, BLIND WILLIE “AMERICAN EPIC: THE BEST OF BLIND WILLIE JOHNSON“  TMR-462 (THIRD MAN)
Texas slide guitarist and gospel bluesman Blind Willie Johnson recorded only 30 songs over the course of his life as a preacher and street performer. Even so, his savvy combo of gritty vocals and slide guitar bestowed a notable legacy. Remastered. (2017)
KAROVAS MILKSHAKE “IN THE SHADE OF THE PURPLE SUN“  GROO-052 (GROOVIE)
The debut album by Russian psych-rockers Karovas Milkshake is a lot like its attractively lurid dust sleeve: short on subtlety, with finesse aplenty. This is one for those revivalists who savor vintage production and Brian Jones-esque sitar riffs. (2016)

LOTHAR AND THE HAND PEOPLE “MACHINES AMHERST: 1969“  MH-8053 (MODERN HARMONIC)
Lothar And The Hand People emerged as one of the earliest pioneers to mix electronics into rock, incorporating theremin and synthesizers into their sonic onslaught.

MELVINS “HOUDINI – 180-GRAM (GATEFOLD)“  TMR-295 (THIRD MAN)
Released in 1993, The Melvins’ best-selling fifth album was a conscious attempt by the band to make a record that wouldn’t alienate their fans while also be enjoyed by the band itself. Six tracks are produced by Kurt Cobain! Remastered reissue. (2016)

MELVINS “STAG – 2xLP / 180-GRAM (GATEFOLD)“  TMR-297 (THIRD MAN)
The final album in The Melvins’ major-label span, 1996’s Stag finds the band fully spreading their wings (and budget) to create what is arguably their most wide-ranging and diverse album. Remastered reissue. (2016)

MUHAMMAD, IDRIS “BLACK RHYTHM REVOLUTION!“  BGPD-1068 (BGP)
Originally issued on Prestige in 1971, Muhammad’s debut album is a fine synthesis of the disparate elements that went into the era’s R&B/Soul/Jazz experimentation and an indication of the many changes that were to occur in Black Music. Reissue. (2009)

PONTAS, OS “FUZZ JUNGLE“  GROO-054LP (GROOVIE)
Having emerged from the torn and bloody earth once belonging to the Tupiniquim Indians, Os Pontas’ present their second album, Fuzz Jungle: 12 tracks of instrumental soul-fuzz capable of tweaking mustaches and wasting shoe soles down to the core.

PUCHO “JUNGLE FIRE!“  BGPD-1049 (BGP)
Originally released in 1969, the seventh (and arguably best) album by Pucho’s funky Latin combo differs from some of their earlier Prestige records in that the tracks are longer, more instrumental, and have a hard, fuzzy, electric groove. Reissue. (2009)

REDDING, OTIS “IT’S NOT JUST SENTIMENTAL: THE UNHEARD OTIS“  SXD-041 (STAX)
This is the “lost” Otis Redding album: 14 never-before-heard cuts mined from the valuts at Stax Records. Essential for any stalwart fan of Southern Soul. Includes “Loving By The Pound,” “You Got Good Lovin’,” “Send Me Some Lovin’,” and more. (1992)
RHYTHM CHECKERS “WILD RAW EUROBEAT 1966/67“  GROO-010LP (GROOVIE)
The Rhythm Checkers were an exceptional ’60s beat group playing a raw mixture of R&B and RNR with a wild garage attitude. The eight mythical tracks of their two rare records are present on this LP, plus both sides of their rare prog-pop single from ’72.

RODRIGUES, ARNAUD “MURITURI“  GROO-069LP (GROOVIE)
With plenty of Brazilian grooves, tropicalia and fuzz guitars by the great Larry Gordin, this LP proves the creativity of Arnaud mastering words and summoning maestros for arrangements.

ROUTES “SKELETONS“  GROO-0050LP (GROOVIE)
The fourth album by Japanese garage revivalists The Routes is bursting with pissed-off energy, earworm melodies, and the suzziest fuzz guitar sound you’ve ever heard. Contains 11 new tracks of ’60s-era R’n”R to knock the cobwebs off your speakers. (2015)

ROUTES “TUNE OUT SWITCH OFF DROP IN“  GROO-076LP (GROOVIE)
THE JAPANESE RESIDENTS, THE ROUTES, LEADING BY CHRIS JACK, RETURNED WITH A NEW SLAB OF A KILLER GARARE, PSYCHEDELIA, INDIE AND HEAVY LIKE HELL LP…

SEGALL, TY “FRIED SHALLOTS“  DC-684-1 (DRAG CITY)
Fried Shallots is a handful of numbers from different times and places that all work together in a weird way; rock with the gears shifting and stripping; a primal outburst; a quick-and-fuzzy soundtrack of rock, folk, R&B, and pure powerpop. (2017)

SLEEP “SCIENCES – 2xLP (GATEFOLD)“  TMR-547 (THIRD MAN)
Sleep’s first full-length album of new recordings since 1998. Years after the release of Dopesmoker in 2003, the sonic titans reaffirm their place at the top of the riff pyramid with this brand-new double album, The Sciences. (2018)

SOUND REASONS “WALK WITH MY SHADOW“  GROO-068LP (GROOVIE)
Debut album that launches attacks of primordial FUZZ over unstoppable, hammering rhythms and unveil a world of janglin strings within a landscape of groovy bittersweet harmonies.

SWAMPS “ROCKIN’ MESS!!!“  GROO-058LP (GROOVIE)
Remember The Gories with their fucked up solos, off tempo and beat, sounding as wasted as they can be? This is the japanese translation: Infused with fury it’s a collection of rollicking tunes and rockin’raucousness that will send you dancing to Nippon.

T. REX “IN AMERICA“  EARS-130 (EASY ACTION)
This remastered compilation features rare and unreleased broadcasts from the USA, including “The Groover,” “Jeepster,” “Get It On,” “Hot Love,” and a 12-minute-plus version of “Jewel.” Includes unpublished photos and copious liner notes. (2017)

THUNDERBEATS “PRIMITIVE SOUND“  GROO-067LP (GROOVIE)
Recorded using 100% analogue equipment, this is a delivery of top-notch garage rock from Russia. ‘Primitive Sound’ is suitable for fans of a.o. The Kinks, The Seeds and The Remains!

TONES, LOS “WHAT HAPPENED“  GROO-060LP (GROOVIE)
On LP2, Sydney four-piece Los Tones lay down a twang-slung vision of garage rock as filtered through the ghosts of The Blues Magoos, Electric Prunes, and The Monks. They’re running the fuzz high and hectic and binging on surf vibes. (2017)

VAN ZANDT, TOWNES “OUR MOTHER THE MOUNTAIN“  1090-1 (FAT POSSUM)
Our Mother the Mountain is the second album by country singer/songwriter Townes Van Zandt released in 1969. It is generally acknowledged as his first masterpiece.

VARIOUS ARTISTS  “BRAZILIAN NUGGETS VOL. 4“  GROO-078LP (GROOVIE)
New volume on this killer series that digs dip into the Brazilian archives, dumps, stores, caves, and in the most obscure and faraway places to bring you another unbelievable selection of fuzz, psych and crazy tracks from the tropics….

WILD CHERRIES “16 POUNDS OF R&B“  GROO-063LP (GROOVIE)
Less celebrated than many of their Australian contemporaries but arguably more significant in the creative stakes was Melbourne’s Wild Cherries. If you’re into savage stuff like The Knks or Pretty Things or late-60s psych, this album is for you. (2017)

HIVES “I’M ALIVE / GOOD SAMARITAN“  TMR-626 (THIRD MAN)
It’s been nearly two decades since the Swedish rock-n-roll heroes The Hives unleashed their debut album on the world and almost 5 years since new music has been released.

MODULARES “S/T EP“  GROO-0113 (GROOVIE)
A terse explosion of Portuguese post-punk influenced by late ’70s and early ’80s powerpop – with a twist from the old garage-punks of the ’60s. Features songs about love adventures and misadventures, swinging nightlife, and lonliness. (2014)

SOUND REASONS “TILL THE END OF TIME / IF I CARED / I WALK WITH MY SHADOW“  GROO-110EP (GROOVIE)
Coming from the four corners of LA County, the Soud Reasons united to reinvigorate the period of musical lawlessness between 1965-67. Their debut is sure to turn your party, cookout, or freakout on. These guys have the stuff. The stuff that defies Reason!

SWAMPS “ROCKIN’ MESS!!!“  GROO-058CD (GROOVIE)
Remember The Gories with their fucked up solos, off tempo and beat, sounding as wasted as they can be? This is the japanese translation: Infused with fury it’s a collection of rollicking tunes and rockin’raucousness that will send you dancing to Nippon.

VARIOUS ARTISTS  “SOUL BRAZA VOL. 1“  NS009CD (NOSMOKE)
A collection of some of the best tracks of Brazilian psychedelic soul music; a fusion of fuzz, sweat and dancing inspired by the likes of James Brown, Otis Redding, and Aretha Franklin. Viva la Braza!

ORDER NOW from the WEBSTORE

Our store is now open Monday through Saturdays 10 am to 6 pm!