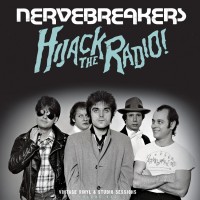 VINTAGE VINYL & STUDIO SESSIONS, VOLUME ONE
An anthology of mid to late 70s studio recordings, some of which ended up on the Nervebreakers‘ late-70’s 7″ vinyl releases on Wild Child Records, some on the 1979 Texas punk LP compilation Are We Too Late For The Trend? (ESR Records), some on a volume of Italian label Rave Up Records series of American Lost Punk Rock Nuggets, and others that have up-to-now never been publicly released… (more)